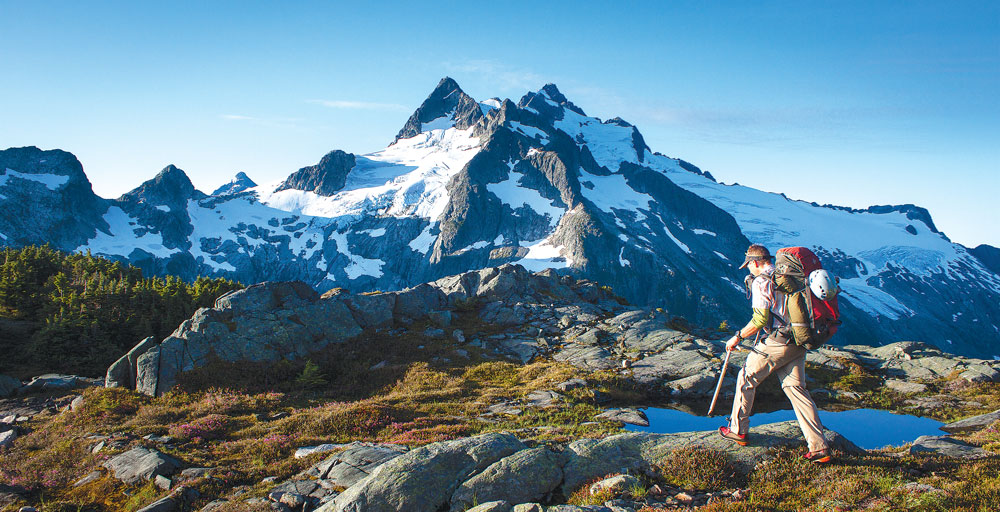 Highly recommended. This is a fine adventure over 11 km of superb high alpine terrain, long on distance and with moderate climbing, but demanding skill at route finding and speed. Virtually all ascensionists today fly in by helicopter … an entirely by-foot approach would be an arduous affair, best done via the trail up Sigurd Creek …  and render the traverse into a 28 km, three- to four-day affair…

The Tantalus Range is a rugged ridgeline of peaks 10 miles northwest of Squamish, B.C. If you’re driving to Whistler, the range is to the west – up close and intimidating. It’s close to town but guarded by brush, rugged trails, river crossings and lots of elevation. Most climbers fly in but our team couldn’t resist the challenge McLane hinted at in his description. Consequently, on the 6-mile hike up Sigurd Creek and over the shoulder of Pelion Mountain (6,000-plus feet of elevation gain), Tim, Gord, Steve and I debated the meaning of “arduous.” We all agreed, between gasps, that we had a physical trip ahead of us, but we were somewhat worried about a guidebook author using the term, since mountaineering is not typically considered a relaxing hobby.

Four days later as we sweated our way across a swaying cable hanging over the Squamish River, we all concurred: McLane’s description was apt. Arduous, however, doesn’t mean it’s long on objective hazards, monotonous toil or uncomfortable camps. Rather, expect spectacular scenery, engaging route-finding, quality climbing and fantastic camps and huts. And solitude. We had every route and summit to ourselves in mid-July. You could certainly make the trip faster or slower, but this is what we did: 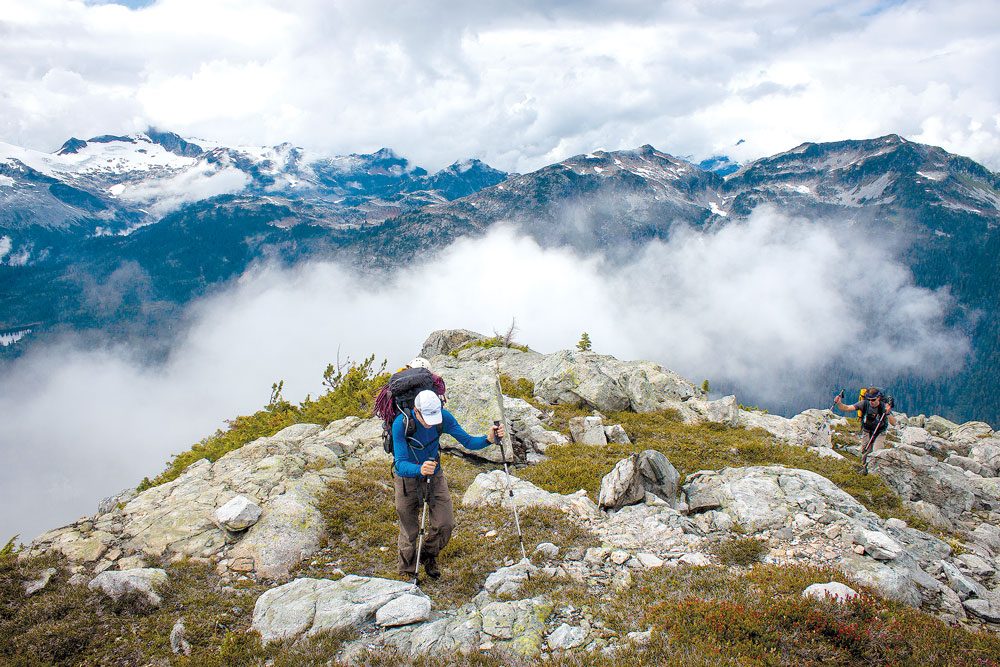 We stashed a road bike at the logging spur that leads to the cableway over the Squamish River, at the south end of the trip, and drove to a wide spot in the road that marked the start of the trail up Sigurd Creek, at the range’s north end.

A well-marked and recently maintained trail ends at the moraine below the summits of Pelion and Ossa mountains. We encountered some minor crevasses around the shoulder of Pelion, but overall it’s mellow terrain to the camps at the first tarns above the Pelion/Zenith col.

Our camp was comfortable with water and great views toward the first part of the traverse over Mount Tantalus, which we would tackle early the next morning. It looked a bit steep… 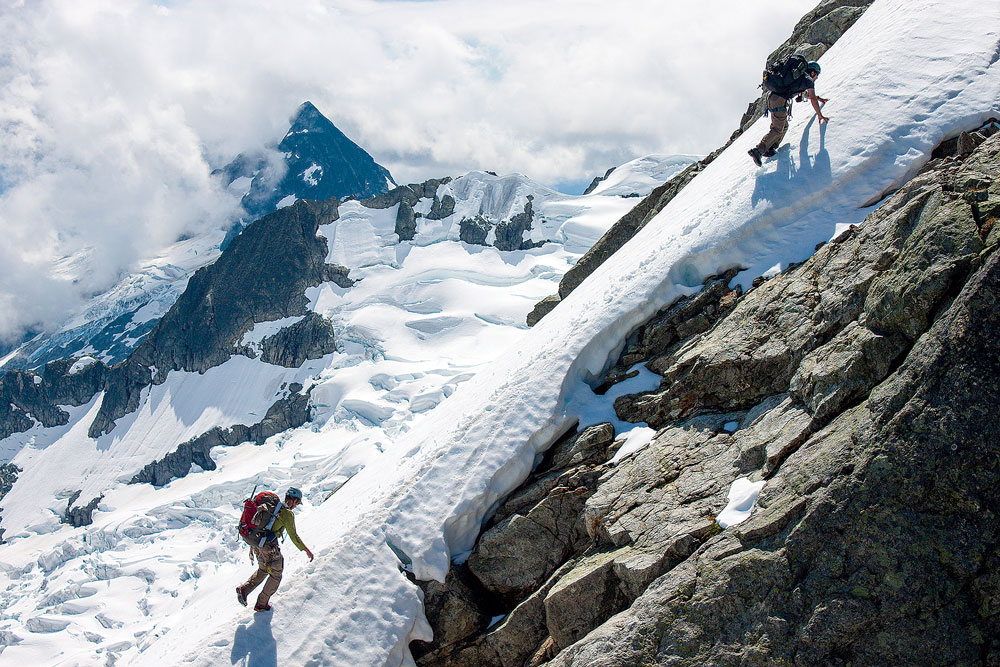 Once off the glacier, we climbed to the summit of Tantalus unroped on quality fourth class terrain with a few low fifth class moves. This is why you come on the Tantalus Enchainment – outrageous exposure, solid climbing and stunning scenery! However, the descent off Tantalus is unsavory.

We took the high traverse, per McLane’s description, until we could rappel down the Darling Couloir to gain the loose ramp that accesses the glacier high on the shoulder of Mount Dione. Expect shenanigans getting to the glacier below Dione.

Once at the base of Dione, easy third and fourth class scrambling took us to the summit and an impressive view across the void back to Tantalus. We did one rappel off the summit tower of Dione and followed some recent tracks down the high snow shoulder.

In our tired state, we did a couple of single rappels off the shoulder to gain the glacier and finished with easy glacier travel all the way to the Jim Haberl Hut. This hut is incredible — location, amenities, comfort and a hut book packed with beta. It’s a huge improvement from the Red Tit Hut (seriously) that it replaced. 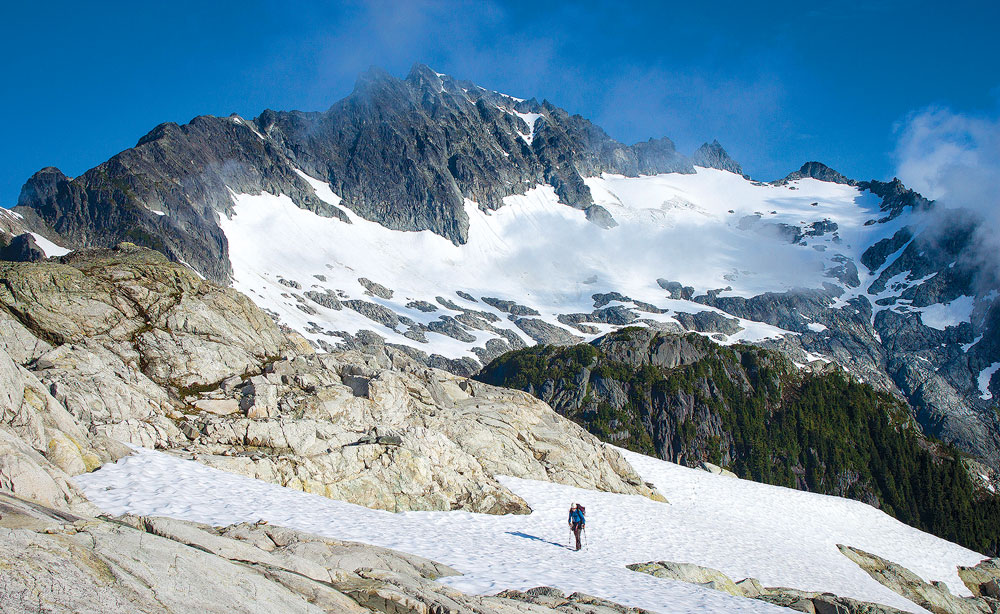 It’s always a good idea to read the hut book. It turns out there is a new bolted descent route off Serratus Mountain. With this new bit of beta, we left our packs at the bottom of Serratus and climbed unencumbered to the top. Surprisingly good climbing follows just south of the rappel line all the way up to the top. Straightforward rappels bought us back to our packs and we then traversed around the mountain to the Alpha/Serratus col, where we scrambled the west ridge to the top of Alpha Mountain. Fun and scenic, the west ridge route finishes at a great summit for lounging. 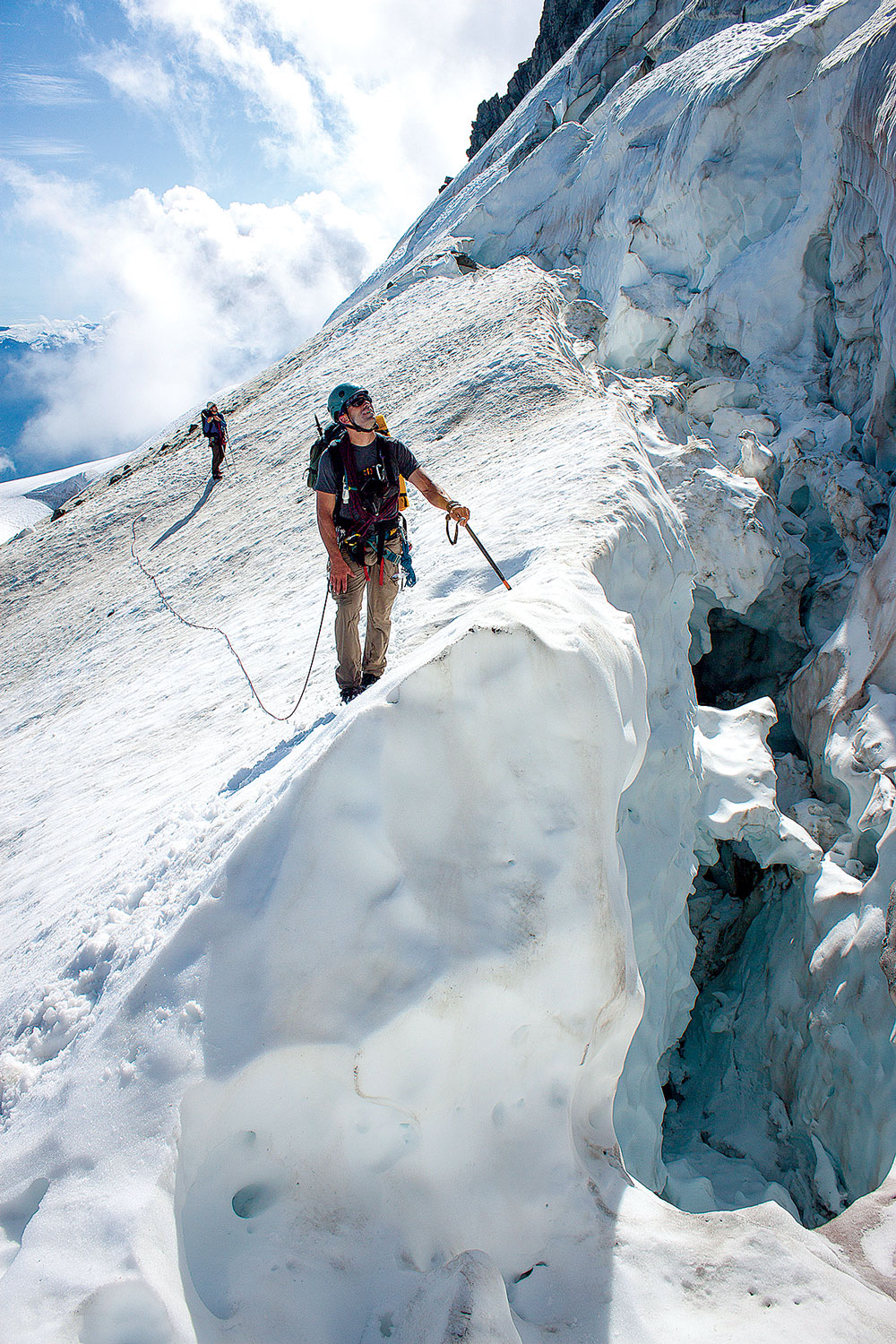 The east ridge of Alpha did not look easy to descend, but we wanted to stay true to the traverse as much as possible, so down we went. The ridge became more exposed as we descended, until we had to start rappelling fifth class terrain near the route’s base. A bit more rambling on the glacier got

us to the col that leads to the lake and hut. We expected a climber’s path but found none, despite fanning out and looking, and ended up bashing our way down through horrific mosquitos and somewhat thick brush all the way to Lake Lovely Water. Again, expect shenanigans.

Although the sun had set, we all jumped in the lake to wash off three days of salt and dirt. This left us chilled and wet, but at least we had a hut to cook in. The mouse-infested hut got us away from the mosquitos around the lake, but it’s a far cry from the Jim Haberl Hut. Over dinner, a few young Canadians treated us to the story of how their team imploded the day before. Their epic involved multi-hour route-finding arguments, a middle-of-the-night rowboat rescue, and lost (abandoned?) gear. Half of the team helicoptered out as we arrived, presumably to never talk to the other half again. 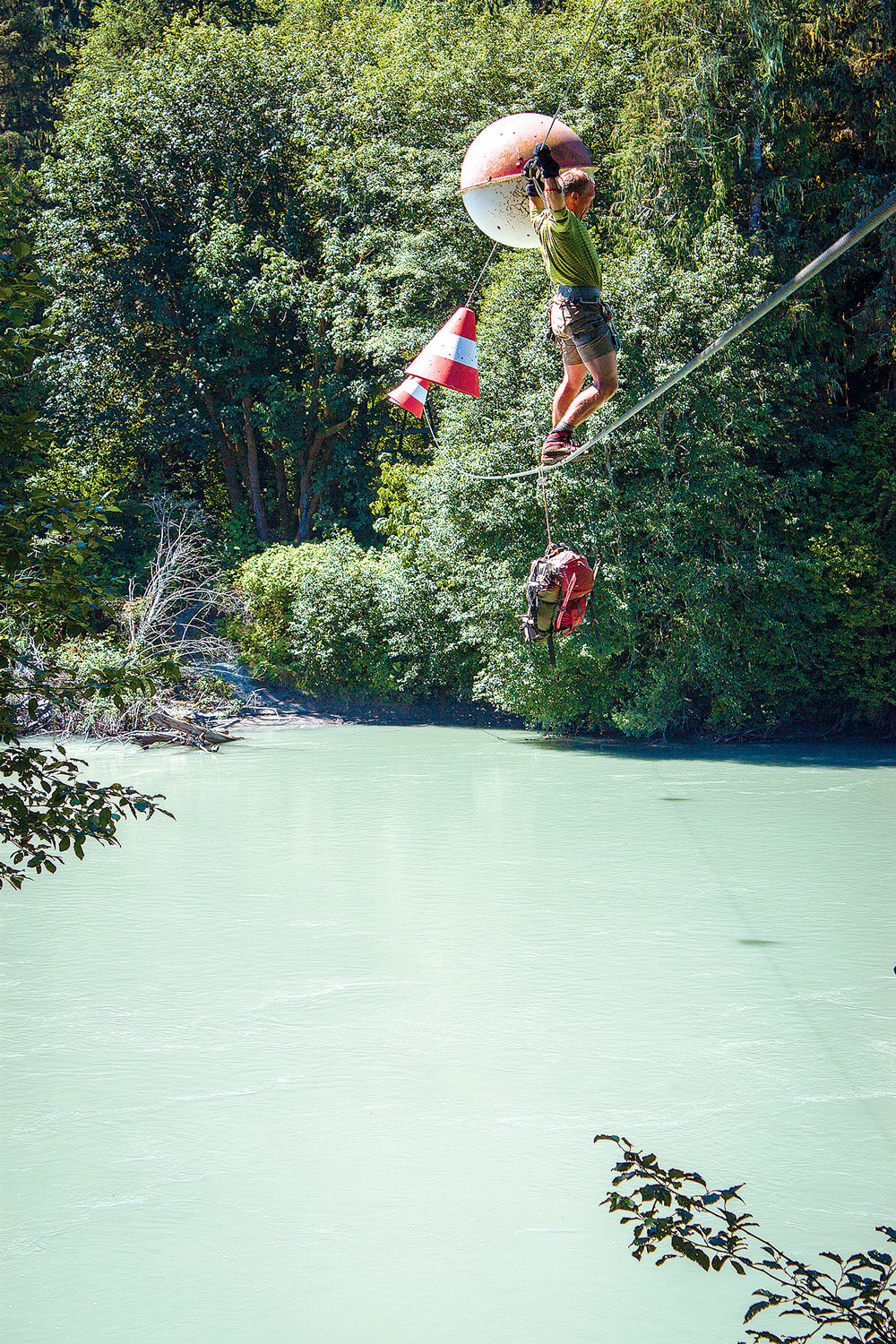 This is a steep trail! In a couple of sections you could die if you slipped, which surprised us. Still, it was well marked, easy to follow and direct, so we made quick progress. There are some beautiful waterfalls along the way, old growth and interesting rambling along the Squamish River.

Before we knew it, we were at the dreaded cable crossing. We had been thinking about it for months and obsessing over whether we had large enough locking carabiners to fit the fat cable. We all walked it, using a large belay locker to hang our packs on the lower cable, hooked to us by a long tether.

We each had a couple of slings clipped to the top cable, allowing us to clip past the giant buoys (careful of hornet nests!) that add spice to an already adventurous crossing. When the upper and lower cables start to sway out of sync, it gets your attention. Expect shenanigans.

Once our whole team was safely across, Gord offered to ride the bike (pre-placed at the start of the trip) back up to the truck. Tim thought he could beat him by hitching and so the race was on. Steve and I stayed back to guard the beer (also pre-placed) and made bets as to who would win. We were both surprised to learn that they had tied.

I’ve done a lot of alpine traverses in Cascadia, but I think the Tantalus Enchainment packs more adventure into a shorter time commitment than any other. I wholeheartedly agree with Kevin McLane: “highly recommended.”  x

Jason Griffith is a Mount Vernon-based fisheries biologist, member of Skagit Mountain Rescue, husband and father of two young boys. In other words, accidents aren’t allowed when he heads to the hills with the Choss Dawgs.